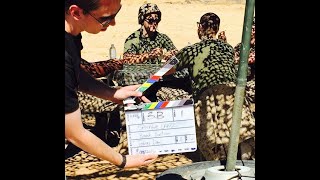 Hall had been a host on The Late Show, another talk show on Fox, after the dismissal of Joan Rivers. He was given a 13-week run, during which he became unexpectedly popular. During the monologue of his final appearance as host, Hall stated that the reason he had agreed to only do 13 weeks was because that was as long as he was able to stay, as he had plans "to do other things."[11] He subsequently began working on the Eddie Murphy vehicle Coming to America. He ultimately signed with Paramount Television before Fox finally decided, after the fact, that it wanted to keep him.[12] Hall had a fairly long connection with Paramount before this, having been the in-house comedian on Paramount's weekly music series Solid Gold for several years and serving as a co-host for its final two years.

Arsenio was one of two late-night shows to premiere in January 1989; the other was The Pat Sajak Show on CBS, hosted by longtime Wheel of Fortune host Pat Sajak. Unlike Sajak, Hall benefited from prior experience hosting a late-night program, especially when compared with Sajak's lack of emceeing experience outside of his Wheel duties. Hall also had a clear demographic to serve (whereas Sajak was targeting the already-taken demographic that was watching Johnny Carson), and his show premiered exactly one week before Sajak's, giving him a head start. While Hall's show became a near-instant hit, Sajak's show was a ratings flop and was canceled after little more than a year. - Wikipedia

Shared for Historical Purposes. I do not own the rights.
#####
Reelblack's mission is to educate, elevate, entertain, enlighten, and empower through Black film. If there is content shared on this platform that you feel infringes on your intellectual property, please email me at Reelblack@mail.com and info@reelblack.com with details and it will be promptly removed.